The third part deals with the management level and the question why it is almost necessary to lead out of the paradox of values.

A short review: While the first part was about individual values and their diversity, the second part dealt with the dynamics of value gaps at the organisational level. According to this, organisational values are not a defined set of values that is fixed and established. Rather, they are a reflection foil for the decision-making practice of each organisation member. And also fuel for the development of the organisation.

Let us take the values of a company I know well: innovative – willing to perform – loyal – cooperative. I have changed the terms only slightly. Not so that you can start the search engine you trust … customer protection, I’m sure you understand that].

The second blog already dealt with the contradiction of values. There, I saw this as a possibility for reflection on my own actions: Which of the (contradictory) values should gain the upper hand in the current situation and why? This could be a question for reflection that helps to guide oneself in this situation. At management level, it is not only about these possibilities. It is about more. For the sake of the organisation, it is important and right, even necessary, for management to propagate contradictory values. Harmony leads to inattention and uniformity at this point. Organisations cannot afford both – especially not in dynamic situations.

Back to the four exemplary values mentioned above:

You see: The values move on four different playing fields, so in practice they can quickly come into conflict with each other: Am I loyal to my rather sluggish colleague or willing to perform? In negotiations, am I loyal to my back office (limit of the negotiation mandate) or to the client (stability of the client relationship)?

Wouldn’t it be better if the organisation were to adopt values that are less likely to conflict? After all, values are supposed to provide orientation, aren’t they? Two questions, two times the same answer: No.

Let me start with the second question. So the one about orientation through values: In the second part of this blog I had already pointed out that values do not provide orientation. Not like a fixed star that gives a clear and correct answer to a decision. Rather, values are an offer for reflection in decision-making situations.

What is the use of a paradox of values?

Lotte Lüscher and Marianne Lewis gave the reasons for the ‘no’ to the first question about the harmonious values. The two found that goals and values at management level are characterised by contradictions. This has nothing to do with the fact that people at this organisational level are less capable of logic or enjoy doing the inappropriate. Rather, the management level is permanently faced with the challenge of integrating new figures, data and facts that do not fit into the previous picture (the ‘story’ or the ‘big picture’). After a short time, this no longer looks like a clearly laid out map of Mannheim city centre, but more like a festival site after four days. So far it may sound as if it all originates from a defensive position.

Much more important for the paradoxical patchwork of values, however, is that it enables management to address the various demands in the organisation much better: For example, the sales department attaches more importance to partnership, the development department to innovation, the operative department is committed to performance and ‘loya’ is the topic of controlling. The art and task of management is now not to leave it at the ‘value-based’ approach to each department, but to

This requires being open to experiment, to catch up with other aspects, to acknowledge and endure contradictions. And to represent all this actively and communicatively. This leads to professional action in generalised uncertainty.

It requires a form of dialogue that could be well described as ‘palaver’ if the term did not have such a bad reputation. In African culture, palaver is highly regarded. It is about getting to know each other and getting to know each other, it is a social activity, it is about community building. And that is what the management of paradoxical values is all about: negotiating, letting go of overly rigid values and demands, and creating a common ‘workable certainty’. Only the paradoxes of values make it possible to lead an organisation in a living way.

Values as a productive challenge

Finally a look at three parts “Values”. As long as not

The formulation of organisational values is the beginning of this challenge, not the end result.

Values are multiple. There is a ‘colourful disorder’, which is the task of leadership to manage and use. This is – very roughly summarised – the content of the first blog about values from July. It was about the personal level of values. This second part is about the organisational level and thus about organisational values.

In this way or similar, the aim is to use brainstorming, prioritised lists and participatory workshops to find those organisational values that are exceptional. Two claims are hidden in such promises:

On the other hand, a look at the real existing organisational values shows a great homogeneity of what organisations are worth – what they regard as desirable, good, right: integrity, attentive, team-oriented, willing to perform, open-minded, trusting, efficient, innovative, loyal, responsible, courageous, cooperative, tolerant, exemplary, integer, creative, determined, sincere. Take a handful of these or similar terms, explain them briefly and you have already described the landscape of values of more than four out of five organisations. Why should organisational values be unique? This only increases the likelihood of values occupying an exclusive niche – and getting by the large number of customers and employees. This is precisely why most people play it safe and use the standard values in their hawker’s trays: in this way they prove that they are ‘connectable’ (another such value). By the way, this connectivity becomes a special challenge when values are to apply globally. Intercultural distortions are likely to emerge quickly. Read more in this project report.

The content is important, but practice is even more important

If everyone is doing something similar, is it still worth investing energy, time and money in developing organisational values? The clear answer is: Yes! However, the result – the often polished concept of values and the definition that has been discussed many times – is less important than three other points:

Vague values are not a shortcoming. Values are always vague. There is no clear definition of ‘freedom, equality and fraternity’, not even among the protagonists of the French Revolution. Even if you write detailed glossaries or definitions of terms: In a concrete situation, a concrete person will decide how to interpret and apply the personal and organisational values here and now, based on his or her individual concrete values and the concrete organisational values. This is how values get meaning: through and in practice.

The possibilities for adjusting values in situations not only increase the acceptance of organisational values among the workforce, they also allow contradictory values to be dealt with. According to the Russian-British historian of ideas, Isaiah Berlin, values are not compatible with each other, they often contradict each other. How, for example, should an employee who discovers fraud in his department behave – loyally or responsibly … or tolerantly? How good, if this employee can weigh up the three values and reveals at least one of them.

Organisational values therefore do not provide any orientation. Although this is often claimed. They are merely points of reference that allow reflection in the practice of a concrete situation. They do not guide. They give every member of the organisation the opportunity to guide themselves on the basis of the ‘echo from the wall of values’. 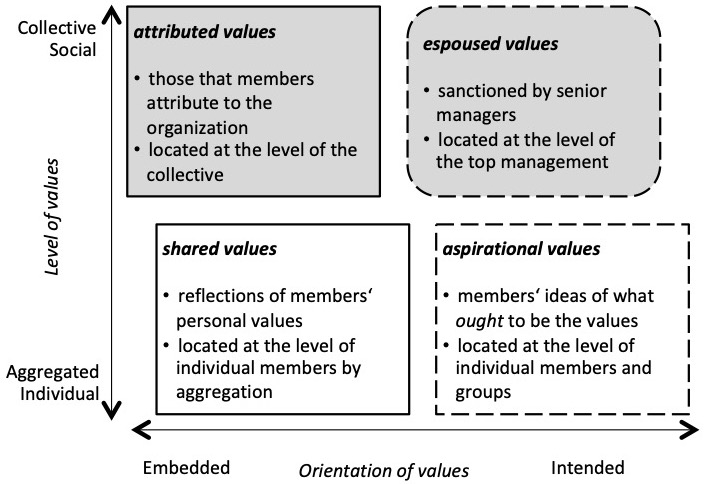 The contents of the four forms do not usually coincide, in many cases they even contradict each other.

Three value gaps as a task for leadership

These non-overlaps result in so-called value gaps at organisational level. The following three are the typical ones in practice, from which different challenges and tasks for leadership arise. 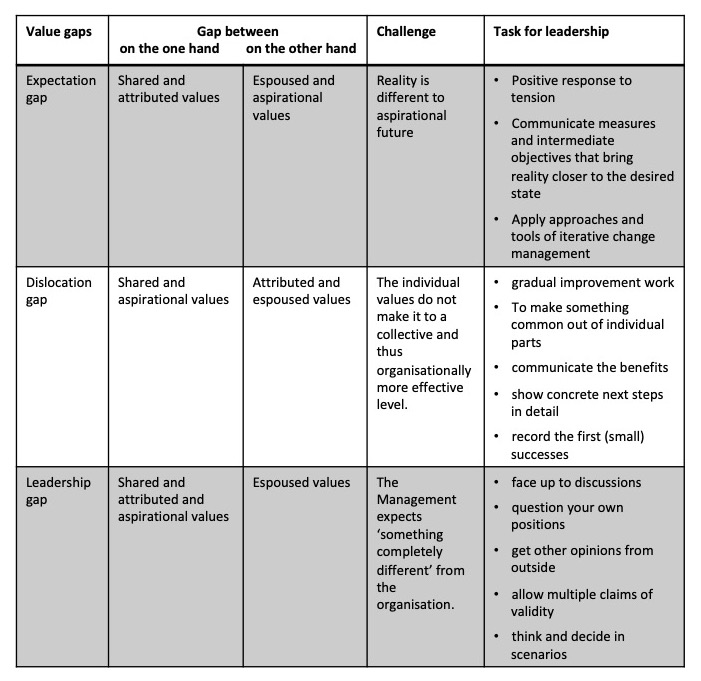 Only worry about your organisation when these value gaps no longer exist – because then it is dead.

Values offer orientation – too many values confuse and create arbitrariness. Today you will learn how to play the keyboard of values.

Then values are no longer the subject of a soft skill culture for nice speeches and colourful graphics on the website. Instead, values will become a strategic issue, creating clarity and understanding, especially in times of uncertainty. This first of three parts is about ‘values in the plural’. And about expectations of the digital transformation and the individual values associated with it.

A ‘valuable’ example to start with

It is important to Hannah Meier to be able to work self-determined and as independently as possible. This enables her to discover and work on many new things. Tim Schreier prefers to carry out routine tasks in clear and delimited areas. This gives him the peace and quiet to concentrate on one thing at a time. The two seem to have very different working motives, perhaps due to personal type preferences. But do they also have different values? Values, understood as those qualities of a decision or a thing that a person considers desirable, good, right? That could be: Curiosity and autonomy in Hannah, determination and perseverance in Tim. Or how about professionalism and quality awareness in both?

Let’s agree on one thing: they have both different and corresponding values. The question then arises as to what values the organisation for which both work has. And whether these values are in any way binding, guiding or orienting. And whether violations of values result in sanctions – then it’s not far to the Guardian Council …

Values are transformable and negotiable

Systems with values with which a claim to truth is made are by definition ideologies. I assume that in a pluralistic society no one strives for this. Values are therefore changeable and negotiable. In the past months of Corona this could be well observed:

What is the point of transformable and negotiable values?

“Modern societies do not need ultimate moral justifications or ultimate moral unity. What they need are regulative fictions with which they can constantly come to a new understanding of what is wanted and desired. Values are just such regulative fictions: They dynamize, emotionalize us humans; they neutralize and pluralize our narrow view of what is and of what should be.” (NZZ, 14th March 2016)

And for all those who now shout “arbitrariness – disorder – value relativism”. Yes, values are:

This is good news for managers, by the way. Because if there were values that were fixed and firmly established, an orienting leadership would be superfluous. There would only be a controlling function. But that is not leadership, that is monitoring.

I highly recommend the German book by Andreas Urs Sommer, whom I quoted above. You can order it online from companies with loopholes in their tax practices, or in your local bookstore or as an e-book. It all depends on the values that are important to you right now: convenience, local economy, conservation of resources. These three values alone will show you that they are hard to reconcile. You can read more about them in the third part of our blog. 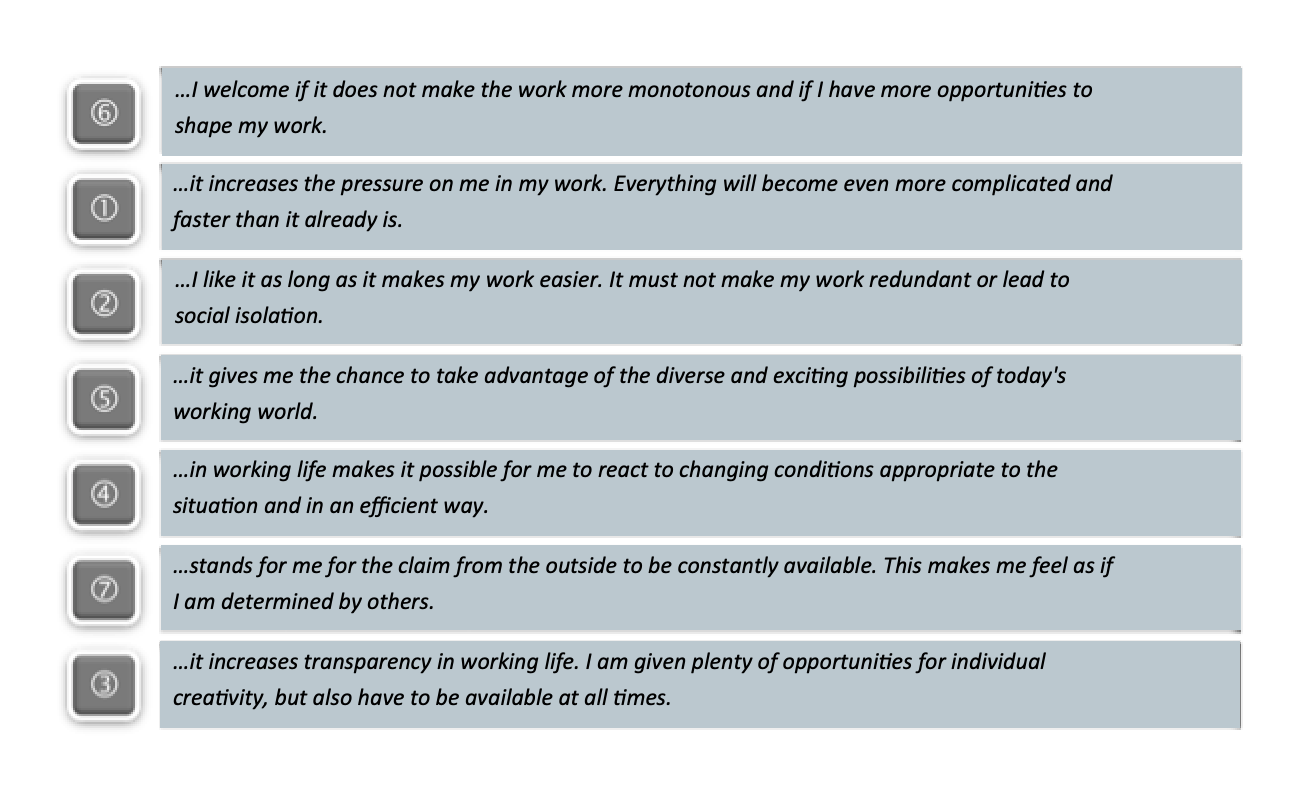 As a result, you should now have one to three statements that you think are appropriate. This selection says a lot about you and your attitude not only to the digital transformation, but to gainful employment in general. And your selection gives an indication of the values that are now important to you in your work.

If you can make out the numbers of these statements in the following diagram, then you have position