Women in management positions: Tips for a successful path to senior management – Part 2

Women in management positions: Tips for a successful path to senior management – Part 2

In this second part of Gabriele Möllenkamp’s blog, you can read about the self-image and understanding of roles, and the attitude to micro-political strategies that help women in management positions on their way to upper management.

Last week I again had the opportunity to present this differentiation in a seminar and to discuss it together with my (female) participants.

A fundamental question was: If I agree with this description or differentiation and take it seriously, does that mean that I should change my behaviour as a female leader in the direction of ‘credibility’? And – to put it more pointedly – the question: Is that (actually) your recommendation? My answer: “It depends.” In saying this, I am not evading an answer, rather I am describing a principle of rhetoric: ‘Choose the strategies that support the achievement of your goal’.

This recommendation to act strategically is repeatedly met with sometimes fierce opposition in training and coaching sessions for female leaders – and this seminar is no exception. This is expressed in formulations such as: “I don’t want to bend” or: “I want to remain authentic.”

In my experience, female leaders tend to reject strategic approaches in dealing with each other, while male leaders see corresponding recommendations as a helpful, useful tool to add to their own toolbox.

Typical female communication is oriented towards content and relationship; typical male communication is oriented towards status and territory. Strategic recommendations are accordingly understood by male managers as support to consolidate their status. Female managers tend to understand them as an attack on their self-image and understanding of their role.

An understanding of roles based on gender stereotypes makes it difficult for female managers to act in a power-political way in status- and power-oriented contexts.

Research by Mucha and Rastetter on the willingness of female emerging leaders to use and build power clearly shows:

Recommendation for women in management positions

What recommendation for a successful path to senior management can be derived from this?

That means: ‘Play along and watch what happens’. I wish you much success in this. If you have any questions, please feel free to contact me.

In this first part of her blog, Gabriele Möllenkamp describes what women in management positions should pay special attention to on their way to upper management.

According to a recent statistic of the Federal Statistical Office in Germany “only every third manager is a woman”. Nevertheless, there are women in management positions and the question arises as to what they have done differently from other female leaders.

Perhaps you are familiar with the term ‘glass ceiling‘? This image describes the experience of many women in middle management: advancement to first and second management functions succeeds well, but then the path falters: advancement to management or the board of directors still does not want to succeed.

A look back: June 2013 – an event on the topic of ‘The Glass Ceiling’ – hosted by the head of a university of applied sciences. Marion Knaths was invited as a key note speaker; among other things, author of the book ‘Games with Power’. The host opened the event by saying that she had never come into contact with the glass ceiling in the course of her career. She had never had the experience of being denied something just because she was a woman. And she went on to explain that – without having been aware of it – she had consistently used behavioural patterns throughout her education and professional career that are described and recommended in the book as ‘assertive’.

Women and Leadership: The importance of behaviour and impact

Here it becomes clear: women and leadership is always a question of behaviour and effect. It is not only professional qualifications that count; it is much more important to attract attention and to convince through appearance and performance. The following overview describes which forms of behaviour are best suited for this: 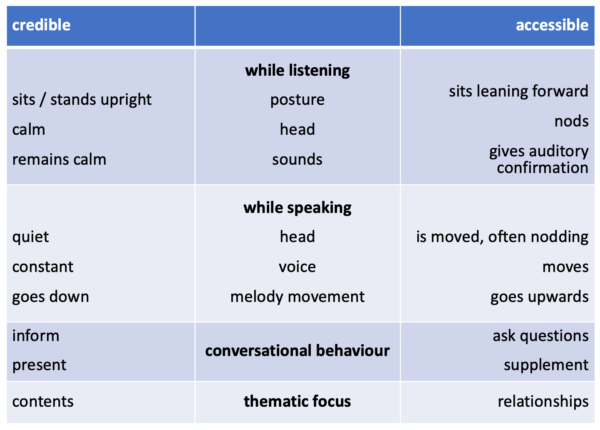 Therefore, it is important to practise credible behaviour with women for a convincing appearance as a leader.

Women in management positions: 5 tips for a convincing appearance

3.    Lower your voice at the end of the sentence.

4.    Inform more than ask in the conversation.

5.    Do not put your thematic focus on relationships but on content.

The effect of body language – facial expressions, gestures, behaviour in space – also plays an important role in current training and coaching for women. Sustainable, i.e. long-term lasting change, however, requires a focus on other aspects in addition to the concrete visible behaviour. Behaviour is rooted in individual attitudes and based on fundamental beliefs. The waterlily model illustrates this connection.

In the next blog on women and leadership, you will read more about the self-image and understanding of roles as well as the attitude towards micro-political strategies. In order to bring more women into management positions, pure behavioural training often falls short. Read here what constitutes an attitude of ‘shaping leadership’.