In our new podcast episode (available in German language), you can hear how to shape organisational culture and its importance in change management.

In the conversation with my colleague Matthias Diederichs, one of the topics is what “the organisational culture” actually is and what managers should consider when developing the culture. In addition to insights into concrete practical projects from profit and non-profit organisations, you will receive concrete suggestions that are particularly relevant in the development of organisational culture. This blog will inform you about them in a nutshell.

What does the term “culture” actually mean in organisations?

According to McLean and Marshall (1985), “organisational culture […] is the assembly of traditions, values, proceedings, conceptions and attitudes which create the context of the activities from the organisation”.

If you ask people in organisations about ‘their’ culture, it is usually difficult to find concrete answers. Because culture is difficult to grasp, not visible and always specific. It is about HOW the structures, the hardware – the WHAT – are lived. This way of dealing with the WHAT has usually developed over years. It is the common thread in the way people in an organisation deal, for example, with their tasks, with customers, with problems or even mistakes. The iceberg model shows that a large part of what influences culture is not conscious to organisational members. However, it is precisely this part that has a great influence on which routines are formed in the organisation and how people behave in the organisational context. It is worth analysing these routines and their (external) impact in order to identify and shape change potentials and processes. 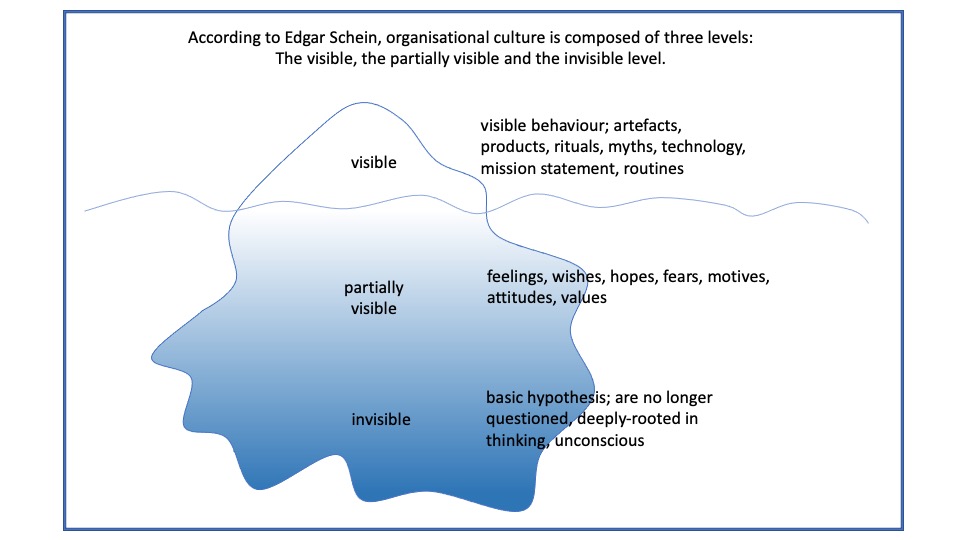 Can change management work without looking at organisational culture?

Despite this considerable influence, the topic of culture and cultural change is one that has long been neglected, if not ignored. Without appropriate cultural change, however, change projects will hardly succeed. Structural change with simultaneous work on culture is effective – culture development with simultaneous work on structures is efficient. In this podcast episode, a practical example is described that shows: In the context of the introduction of group work, only new formal rules led to the establishment of the desired new cultural routines and a new self-image of taking on more responsibility.

The role of the leader using the example of “making decisions”

The manager is the impetus and driver of the desired cultural change as well as the role model for its implementation in everyday life. Many change projects show that such impulses lead to effects that no one foresaw or even expected. This can even necessitate a change in the manager’s understanding of his or her role. An example: The manager decides that employees should make more or more independent decisions. They give them more decision-making power. If this works, the manager makes himself superfluous in the original decision-making structure. Enduring this and possibly letting go of cherished parts of the leadership role can be a significant pitfall in change projects.

And now Matthias Diederichs and I hope you enjoy listening to our new podcast episode. You can also find our podcast on Spotify and Apple Podcasts.